Home » Increase Your Chance of Getting Pregnant: A True Story

This post was written by our hopeful friend and fellow blogger. Let’s call her Jane, a single mommy to-be, living by the beach in Florida.

As a single woman, I decided that I did not want to wait any longer to start a family. I began looking for a donor and trying to determine my cycle and best ovulation date. I tried using a thermometer for monitoring basal body temperature (BBT). I tried several brands of ovulation sticks, but never got a positive reading. Once I found a donor the problem then stemmed from timing and me not knowing what day I was ovulating. My first attempt at home insemination was using a syringe and a menstrual cup. It failed. I was a few days late and hopeful, but I did not become pregnant. Using a calendar to track my ovulation window was helpful, but apparently, not accurate enough. I needed to find an over-the-counter (OTC) solution to detect the ovulation day before trying again. 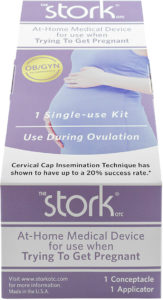 When I tried First Response ovulation kit I got a positive reading for the first time! My excitement soared when I had the tools to accurately track my ovulation! At least now I had a targeted chance!

Then I was introduced to The Stork OTC, a home conception aid using the cervical cap insemination method, which keeps the sperm at the opening of the cervix for up to six hours. This method will hopefully be more effective and now I’m really ready for my next home insemination. 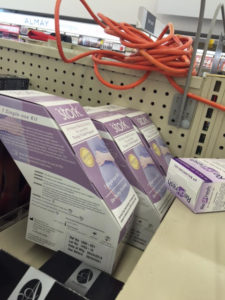 The Stork can be purchased at Walgreens and is located in the family planning section next to ovulation test kits! I actually had to ask for help locating it. The product wasn’t exactly where it was supposed to be and the pharmacist had to look it up in the computer to confirm they had it! It was sort of hidden so be sure to not give up until you get yours!!

The cervical cap insemination method dates back to the 1950s and has a 20% success rate, comparable to intrauterine insemination (IUI) rates of 16 – 21% at a fraction of the cost! The Stork OTC is a perfect home conception aid for anyone who is trying to become pregnant, single or with a partner diagnosed with low sperm count or motility issues. I will be using The Stork for my next cycle, so stay posted!
See you at the Twitter Party on October 27th at 8pm EST, #successwithStorkOTC This is a sponsored conversation from Mums the Word Network and The Stork OTC. All opinions are my own.

Success Story for a Couple Building a Family Later in Life

“My wife and I got married while I was in the Army and between my deployments and careers we ended up waiting until our we were almost 40 to try to start a family. We both had a lot of concerns about our ability to conceive but fortunately the Stork was available. We were able to use it in the privacy of our own home and after only two tries (2-3 months), we conceived.”